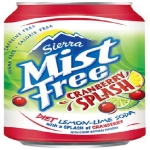 Sierra Mist is a lemon-lime flavored caffeine-free soft drink, introduced by PepsiCo in 2000 and rolled out nationally in the United States in 2003. PepsiCo owns the rights to the similar 7 Up brand outside the U.S. and therefore has not yet introduced Sierra Mist in international markets. Following initial test marketing, PepsiCo first introduced Sierra Mist in 2000, replacing similar soft drinks such as lemon-lime Slice and the test-marketed Storm. The selection of the name “Sierra Mist” was based on favorable market research involving 2,000 people. “Sierra Mist” was selected from over 1,000 possible names. Diet Sierra Mist was also introduced in 2000, and sales of both diet and original Sierra Mist totaled $100 million in its first year of production. At the time of its launch in 2000, Sierra Mist was only distributed in certain regional markets, due to bottling and distribution agreements between Pepsi Bottling Group and 7 Up parent company Cadbury Schweppes. The PepsiCo bottlers continued to bottle 7 Up until existing agreements with Cadbury Schweppes expired in January 2003, at which point its distribution was expanded nationwide in the U.S. In 2004 the beverage had surpassed 7 Up on the basis of annual retail sales, placing it as the 2nd most-purchased lemon-lime soft drink in the U.S. (Sprite being the 1st). In 2005, Diet Sierra Mist was renamed Sierra Mist Free, intended as a descriptor of the beverage being “free of” sugar, calories, carbohydrates and caffeine. This name change was reverted back to the original name, Diet Sierra Mist, in November 2008. In late 2006, PepsiCo introduced Sierra Mist Cranberry Splash. It was only available during the Winter holiday season. Cranberry Splash returned in the fall and winter of 2007, 2008, 2009, 2010 along with Diet Sierra Mist Cranberry Splash. In May 2007 Sierra Mist Lemon Squeeze was introduced. This limited edition featured a higher concentration of lemon flavor and was only available through September 2007.

Tags: None
346 total views, 1 today
fsgeek
Legal Stuff:Freestuffgeek.com does not claim to or imply to be directly affiliated with the manufacturer(s), brand(s), company(s) or retailer(s) of the products listed on this web site, and in no way claim to represent or own their trademarks, logos, marketing materials, or products. None of the companies that produce, manufacture, promote, or distribute the products listed on this website own, endorse, or promote freestuffgeek.com in anyway. FreeStuffGeek.com provides a removal request form for any party that believes that their work has been copied in a way that constitutes copyright or trademark infringement, or their intellectual property rights have been otherwise violated.