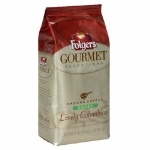 Folgers Coffee is a major brand of coffee in the United States, part of the food and beverage division of The J.M. Smucker Co. The Folger Coffee Company was founded in San Francisco, California, as the Pioneer Steam Coffee and Spice Mills in 1850, and acquired and renamed by James A. Folger in 1872. James came to San Francisco from Nantucket Island at the age of 15 with his two older brothers during the California Gold Rush. Under the mid-20th century leadership of his great-grandson, Peter Folger (the father of Charles Manson murder victim Abigail Folger), it became one of the largest coffee concerns in North America, which has traditionally been the largest market for coffee in the world. Procter Gamble (PG) acquired the company in 1963 and dropped the apostrophe from the products name. PG announced in January 2008 that Folgers would be spun off into a separate company, based in Cincinnati. In June 2008, PG reversed the prior announcement and announced that Folgers would be acquired by The J.M. Smucker Co. based in Orrville, Ohio, by the end of 2008 utilizing a rare financial technique called a Reverse Morris Trust. The Folgers Coffee Company became a subsidiary of The J.M. Smucker Company in November 2008. In the United States, there are 9 families of Folgers coffee (many available in decaf versions) In Canada, Folgers is primarily available as Classic Roast and Mountain Roast.

Tags: None
458 total views, 1 today
fsgeek
Legal Stuff:Freestuffgeek.com does not claim to or imply to be directly affiliated with the manufacturer(s), brand(s), company(s) or retailer(s) of the products listed on this web site, and in no way claim to represent or own their trademarks, logos, marketing materials, or products. None of the companies that produce, manufacture, promote, or distribute the products listed on this website own, endorse, or promote freestuffgeek.com in anyway. FreeStuffGeek.com provides a removal request form for any party that believes that their work has been copied in a way that constitutes copyright or trademark infringement, or their intellectual property rights have been otherwise violated.