Who is your favorite Jersey Shore cast member? 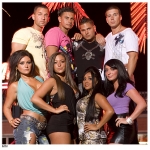 Jersey Shore is an American reality television series that premiered on MTV on December 9, 2009 in the United States. The series follows the lives of eight housemates spending their summer at the Jersey Shore. Season 2 followed the cast escaping the cold northeast winter to Miami Beach, with Season 3 returning back to the Jersey Shore. MTV has announced that a fourth season will be filmed in Italy to air in late 2011. The show debuted amid large amounts of controversy regarding the use of the words “Guido/Guidette,” portrayals of Italian-American stereotypes, and scrutiny from locals because the cast members were not residents of the area. Dubbed a cultural phenomenon, the series has garnered record ratings for MTV, making it the networks most viewed series telecast ever. The series cast has also been credited with introducing unique lexicon and phrases into American popular culture. In 2010, the cast of Jersey Shore was named on Barbara Walters 10 Most Fascinating People list. The series has since exported to dozens of countries worldwide. VH1 producer Anthony Beltempo first proposed the idea of a show focusing on the “guido” lifestyle to TV, in the form of a competition series. Executive producer SallyAnn Salsano, who previously worked on A Shot at Love with Tila Tequila, devised a new concept, inspired by her summers in a Jersey summer share house. MTV Networks President Van Toffler felt that the series “loud, young, bold” style was better suited to MTVs sensibilities than VH1, and MTV programming executive Tony DiSanto felt that “After The Hills, it was time to go for a more authentic approach, like a documentary.”