Free Letter From the Easter Bunny 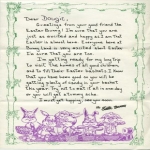 The Easter Bunny or Easter Hare (sometimes Spring Bunny in the U.S.) is a character depicted as a rabbit bringing Easter eggs, who sometimes is depicted with clothes. In legend, the creature brings baskets filled with colored eggs, candy and sometimes also toys to the homes of children t of Christmas, as they both bring gifts to children on the night before their respective holiday. It was first mentioned in Georg Franck von Frankenaus De ovis paschalibus (About the Easter Egg) referring to an Alsace tradition of an Easter Hare bringing Easter Eggs (and the negative impact of too much egg consumption) Bringing Easter eggs seems to have its origins in Alsace and the Upper Rhineland, both then in the Holy Roman Empire, and southwestern Germany, where the practice was first recorded in a German publication in the 1500s (early 16th century). The first edible Easter Eggs were made in Germany during the early 19th century and were made of pastry and sugar. The Easter Bunny was introduced to the United States by the German settlers who arrived in the Pennsylvania Dutch country during the 18th century. The arrival of the Osterhase was considered one of “childhoods greatest pleasures”, similar to the arrival of Kris Kringle on Christmas Eve. According to the tradition, children would build brightly colored nests, often out of caps and bonnets, in secluded areas of their homes. The “Oster Hawse” would, if the children had been good, lay brightly colored eggs in the nest. As the tradition spread, the nest has become the manufactured, modern Easter basket, and the placing of the nest in a secluded area has become the tradition of hiding baskets.

Tags: None
447 total views, 1 today
fsgeek
Legal Stuff:Freestuffgeek.com does not claim to or imply to be directly affiliated with the manufacturer(s), brand(s), company(s) or retailer(s) of the products listed on this web site, and in no way claim to represent or own their trademarks, logos, marketing materials, or products. None of the companies that produce, manufacture, promote, or distribute the products listed on this website own, endorse, or promote freestuffgeek.com in anyway. FreeStuffGeek.com provides a removal request form for any party that believes that their work has been copied in a way that constitutes copyright or trademark infringement, or their intellectual property rights have been otherwise violated.