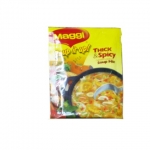 Maggi (pronounced  ma i]) is a Nestle brand of instant soups, stocks, bouillon cubes, ketchups, sauces, seasonings and instant noodles. The original company came into existence in 1872 in Switzerland, when Julius Maggi took over his father’s mill. It quickly became a pioneer of industrial food production, aiming at improving the nutritional intake of worker families. It was the first to bring protein-rich legume meal to the market, which was followed by ready-made soup based on legume meal in 1886. In 1897, Julius Maggi founded the company Maggi GmbH in the German town of Singen where it is still established today. In parts of Europe, Mexico, Malaysia, and Brunei, In German-speaking countries as well as the Netherlands, Czech Republic, Slovenia, Slovakia, Poland and France, “Maggi” is still synonymous with the brand’s “Maggi-W ¼rze” (Maggi seasoning sauce), a dark, hydrolysed vegetable protein based sauce which is very similar to East Asian soy sauce without actually containing soy. It was introduced in 1886, as a cheap substitute for meat extract. It has since become a well-known part of everyday culinary culture in Switzerland, Austria and especially in Germany. The bouillon cube or ‘Maggi cube’ was introduced in 1908, which was another meat substitution product. Because chicken and beef broths are so common in the cuisines of many different countries, the company’s products have a large worldwide market. In 1947, following several changes in ownership and corporate structure, Maggi’s holding company merged with the Nestle company to form Nestle-Alimentana S.A., currently known in its francophone homebase as Nestle S.A..

Tags: None
445 total views, 1 today
fsgeek
Legal Stuff:Freestuffgeek.com does not claim to or imply to be directly affiliated with the manufacturer(s), brand(s), company(s) or retailer(s) of the products listed on this web site, and in no way claim to represent or own their trademarks, logos, marketing materials, or products. None of the companies that produce, manufacture, promote, or distribute the products listed on this website own, endorse, or promote freestuffgeek.com in anyway. FreeStuffGeek.com provides a removal request form for any party that believes that their work has been copied in a way that constitutes copyright or trademark infringement, or their intellectual property rights have been otherwise violated.