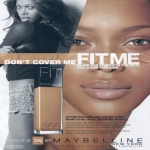 Maybelline is a makeup brand sold worldwide and owned by L’Oreal. Their motto is Maybe she’s born with it. Maybe it’s Maybelline. The Maybelline Company was created by New York chemist T.L. Williams in 1915. Williams, his early 20s, noticed his younger sister applying a mixture of Vaseline and coal dust to her eyelashes to give them a darker, fuller look. He adapted it in his small laboratory and produced a product sold locally called Lash-Brow-Ine. The product was a local hit, but the awkward name held it back. His sister, who inspired the product, was named Maybel. So T.L. Williams re-named it Maybelline, a combination of Maybel and Vaseline. It is under this name that Maybelline has achieved its now legendary status in the field of cosmetics. In 1917 the company produced Maybelline Cake Mascara, “the first modern eye cosmetic for everyday use” and Ultra Lash in the 1960s, which was the first mass-market automatic. In 1967, the company was sold by T.L. Williams to Plough, Inc. (now Schering-Plough) in Memphis, Tennessee. The entire cosmetic production facility was moved from Chicago to Memphis over one week-end. In 1975, the company moved its factory to Little Rock, Arkansas, where it is still located. In 1990, Schering-Plough sold Maybelline to a New York investment firm, Wasserstein Perella. Maybelline Operational Headquarters remained in Memphis until being sold in 1996, when headquarters moved to New York City. The makeup factory moved to Brooklyn, New York, in 2000. Maybelline received a boost when the company hired Wonder Woman star Lynda Carter as the company’s beauty fashion coordinator; she also appeared in several of its television and print advertisements. Christy Turlington, Josie Maran, Adriana Lima, Miranda Kerr, Sarah Michelle Gellar, Melina Kanakaredes, Zhang Ziyi, Siti Nurhaliza, Fasha Sandha, Sheetal Mallar and Kristin Davis have endorsed Maybelline products. The current faces of Maybelline are Turlington, Julia Stegner, Jessica White, Erin Wasson, Kemp Muhl and Emily DiDonato.

Tags: None
372 total views, 1 today
fsgeek
Legal Stuff:Freestuffgeek.com does not claim to or imply to be directly affiliated with the manufacturer(s), brand(s), company(s) or retailer(s) of the products listed on this web site, and in no way claim to represent or own their trademarks, logos, marketing materials, or products. None of the companies that produce, manufacture, promote, or distribute the products listed on this website own, endorse, or promote freestuffgeek.com in anyway. FreeStuffGeek.com provides a removal request form for any party that believes that their work has been copied in a way that constitutes copyright or trademark infringement, or their intellectual property rights have been otherwise violated.